Recently, my neighbors asked me if I wanted their old Kettler ping pong table.  Imagining all the family fun we’d have, I gladly accepted.  The table is aluminum and meant to be outdoors, which is good news because it has been for the past 15-20 years.  It’s mostly in great shape, but on one side of the table there were a couple of broken brackets that hold a square support bar.  I suspect these brackets were those that spent the most time facing the sun when the table was folded and stored alongside the neighbors’ house. 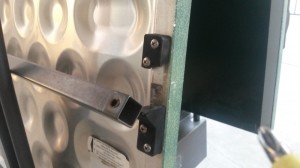 I looked online for replacement brackets for a little while, but I didn’t have much luck finding them.  The closest I came was a drawing of a Kettler ping pong table on the Sears web site, on which I couldn’t make out a clear enough picture to figure out if it was really the part I needed.  What’s more, the bracket there was $20.  Needing at least two of them, I decided to try another route.

My experience with 3D modeling and printing was close to nil at this point, but I thought it might be an avenue worth investigating.  In fact, I had just bought a digital caliper for taking more precise measurements for another project I’ve been contemplating.  I did a quick search for 3D software and found a web site called tinkercad.com among the usual suspects, such as Blender, SketchUp, etc.  Tinkercad is a web-based tool that lets you quickly design 3D models by combining different shapes, which can be either solid or hollow.  The learning curve was small enough that I was able to get to work on modeling right away. The tool has some deficiencies, at least as far as this novice is concerned, such as easily measuring the distance between two parts.  However, it took me just a little over an hour to build the model below with no prior experience. 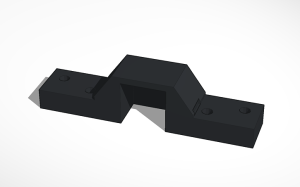 Once I had built the model, I was able to download an STL file, which someone with a 3D printer can use to print it out.  Of course, I don’t have a 3D printer, nor would I probably have thought I had any excuse to have one until a few weeks ago.  So, to get it printed, I went through makexyz.com, where you can locate 3D printers in your area.  I still didn’t have any idea how much it was going to cost me at this point, but I found a couple of local printers and sent them my file to get a quote.  Within an hour, I had a response back from someone nearby who said he could print me the two parts I needed for about $12.  Needless to say, I was amazed.  I agreed, and he had one printing right away.

The next day, I got a few additional quotes, all of which were closer to $40 for the two parts.  It concerned me enough that I contacted the guy already working on my order to make sure he wasn’t undercharging me or that there wasn’t some kind of misunderstanding as to what I needed.  He put my mind at ease, however, and expressed that he just really enjoys what he does and charges $0.25/cm3, whereas others commonly charge about $1.00/cm3.

A few days later, I made it by the printer’s place to pick up the parts.  They were printed in black ABS plastic, which matched the originals, and they seemed plenty sturdy enough to get the job done.  When I got home, I installed the brackets on the table, finding that the screw holes lined up perfectly (kudos to self for not screwing up), and my son and I were playing our first game in no time. 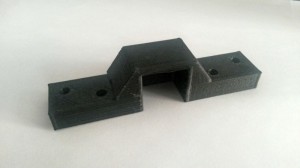 This, my first venture into 3D printing, was unexpectedly easy and inexpensive.  Obviously, the part I made is not very complex, but it’s functionally identical to the original, which is all I was really after.  I’m looking forward to seeing what the future holds for 3D printing, and I’m excited to learn more about it myself.  My next step is to gain some proficiency in a more robust 3D modeling application and see if I can more quickly bring a model from abstract thought into reality.

Link to my model on tinkercad.com.

Get yourself one of these for measuring stuff.

makexyz.com – Find a local 3D printers in your area