This is an addition to my post about the Touch Screen Shield for Arduino UNO, so if you’ve landed here, that may be a good place to start for more information.

Several people have asked about using this touch screen shield with the Arduino Mega, but I didn’t have much advice to offer because I didn’t own a Mega until yesterday.  Now that I have one in hand and have had the opportunity to spend an evening experimenting, I’ve been successful in getting all of the features working with an Aruino Mega 2560, using the screen as a shield.  The disadvantage to this method, as opposed to running wires to a detached screen, is that the data pins span three ports and are in no particular order, meaning several bit shifts and masks must be performed to get the data to/from the screen, slowing things down a bit.  As of this writing, I’m focusing solely on using the screen as a shield, not wiring it externally.  Given more time, I’ll experiment with both methods and post speed comparisons. 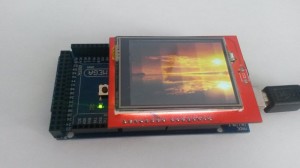 I haven’t done a lot of Arduino programming, so it took me a little while to figure out the whole pin situation in the header files.  Once I thought I understood it, I sketched everything out on my whiteboard and started modifying the TFTLCD.cpp source file to use the correct pins during read/write operations on the Mega.  Even after I had what I thought should be a working version, however, I wasn’t having any luck.  Oddly, the screen suddenly worked after changing one line of code for an equivalent that accomplished the same task.  This led me to believe that it might be a timing issue, where a certain code sequence might be running just fast enough to throw off the timing off enough to cause communication to fail.  So, I looked at the timing charts for the graphics chip, did some code clean up, and added a couple of short delays in the write operation.  With that, graphics became completely functional.

I’ve been using the sdfat library for SD card access on the Arduino.  One of its built-in features is an ability to use a software-based SPI library.  With this, accessing the screen’s built-in SD card reader with the Mega is a breeze, requiring only a few configurations.

Locate the SdFatConfig.h file inside of the SdFat library directory.  You’ll find two defines that should be changed to a “1” value to enable software SPI:  MEGA_SOFT_SPI and USE_SOFTWARE_SPI.  The default pin configurations are already correct.

I made some modifications to the TFTLCD.cpp to support using this screen as  a shield with the Mega 2560 .  I’m providing just the modified source file here for now.  The rest of the source can be located under the original article.  I plan to clean up the code further and provide a better means of using the screen either as a shield or externally through more appropriate pin assignments using compiler directives.  If this is what you were looking for, however, here it is: